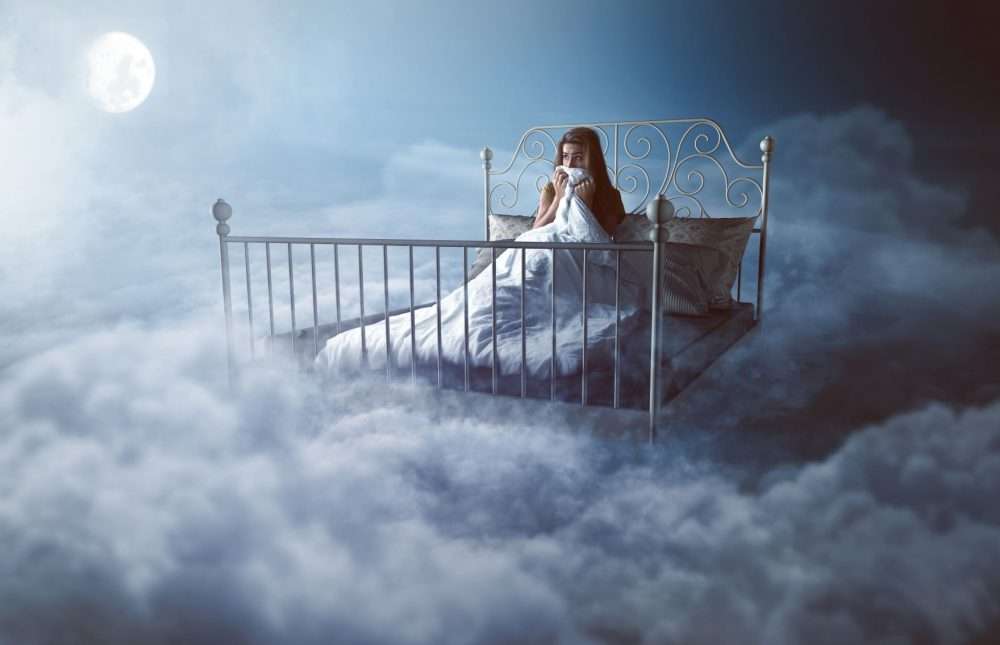 The moon is one of the most ancient and respected symbols across cultures of the world. For thousands of years, the symbol of the moon has represented femininity, wisdom, mystery, fertility, spirituality, and the divine.

The moon features in the myths and legends of many different cultures, and is even a central symbol in several religions through its association with deity.

Examples of this include the Greek goddesses Selene, Artemis, and Hecate, as well as the Roman goddesses Luna and Diana.

In Wicca and other Neopagan spiritual paths, the moon in its full and crescent forms is representative of the figure of the Triple Goddess (the mother, maiden, and crone).

The Triple Goddess represents the stages of a woman’s life as well as the passage of time and the cycles of the natural world. She is, therefore, the goddess of women, fertility, the moon, and the earth.

With all the beautiful and sacred connotations associated with the moon, it’s unsurprising that the moon is also a very common and powerful motif in dreams.

This article will explore some of the most frequently reported and analyzed moon dreams and their meanings, from a general overview of what the moon might represent in a dream to some more specific lunar dream symbols. 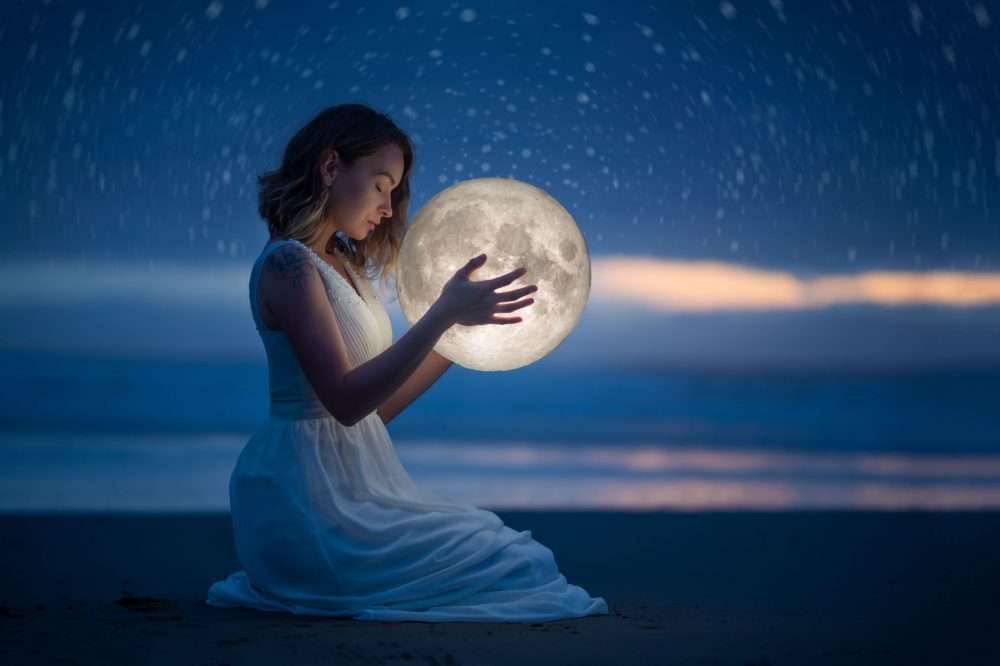 The moon’s main symbolic associations are with femininity, change, and mystery, so a dream involving the moon could be a reference to any of these things in your own life.

If you are a woman, dreaming about the moon could be a subconscious encouragement to embrace or tap into your feminine energy and intuition.

The moon could also symbolize an intuitive, powerful female figure in your life or it could be indicative of a change in the nature of your relationships with other women.

For men, seeing the moon in a dream can be a prompt to embrace their feminine side or a sign that something needs to be addressed on an emotional level regarding relationships with women.

Dreams about the moon can mean that some mysterious, hidden side of your personality is ready to be explored or brought to the foreground.

If you’ve been experiencing fluctuations in your emotional life, the moon in your dream could also be making you aware of these changes in your moods and encouraging you to seek out the root of this turbulence.

On a more positive note, seeing the moon in a dream can also be an indication of upcoming bursts of creativity or new creative projects.

However, these are very general interpretations of the symbol of the moon in dreams as a whole. Where the moon takes on a specific form in a dream, the meaning of the dream may vary.

Let’s talk about some of these dreams now:

The crescent moon is the lunar form most often observable in the night sky, so it’s unsurprising that the lunar crescent is one of the most common moon-related images seen in dreams.

The crescent moon is often a very promising sign when it appears in dreams. It often symbolizes the beginning of something, especially if the crescent is in the waxing stage.

This could be an indication of the early stages of pregnancy, a new relationship, new creative projects, or the beginning of a new adventure in your life such as a big move or career change.

A lunar crescent can also indicate the growth and development of your inner femininity.

Ultimately, seeing the crescent moon in a dream is a sign of progress, either on an emotional level or in terms of the stages of your life.

If you have been dreaming of the crescent moon, you should see this as a very positive and hopeful sign of things to come. 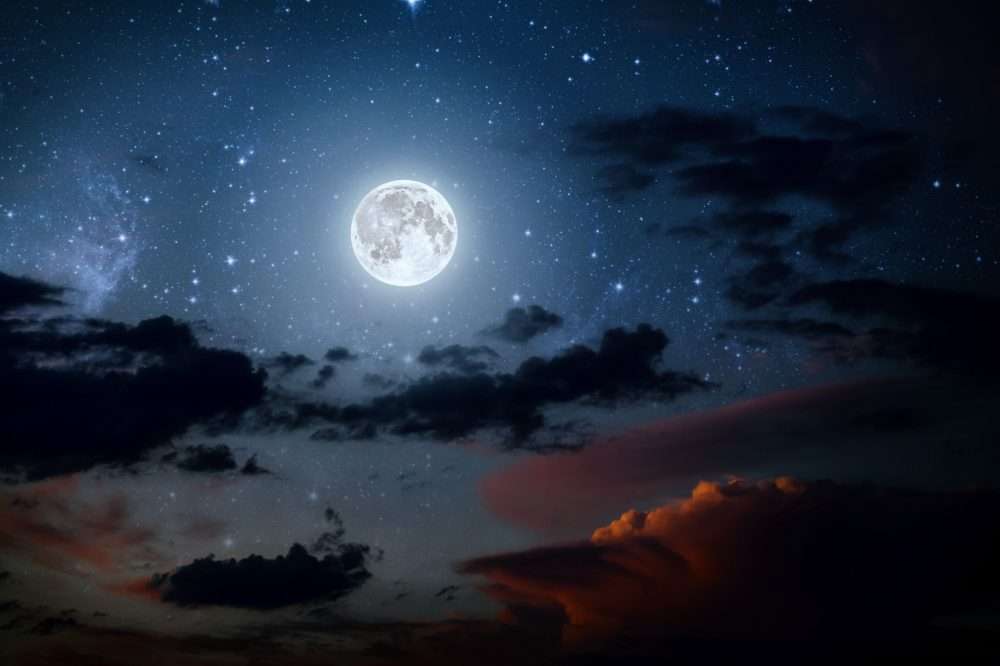 The full moon is a beautiful and very special sight in real life, and this is equally true when the full moon appears in dreams!

The connotations of completion and wholeness that come with the symbol of the full moon can indicate success in your life, be that financially, personally, or relationally. You might have recently attained this success, or it might be something you desire or anticipate in your future.

The full moon can also be a sign that your inner femininity either needs to emerge or has emerged.

The symbol of the full moon is also representative of fertility and pregnancy. If you want to get pregnant or are trying for a baby, seeing the full moon in your dream is a very good sign.

If you are already expecting, the full moon is also a positive indicator of the progress of your pregnancy.

The eclipse is an incredibly powerful dream motif that can tell you a lot about your current situation and the steps you should take in your future.

Dreams involving a lunar eclipse may symbolize that you have hidden away or concealed an important part of yourself (often something connected to your femininity).

You might also be keeping a secret that is impacting your ability to be honest with yourself and others or preventing you from living freely.

To see a lunar eclipse in your dream indicates that you must prioritize and nurture the part of yourself that you have repressed in order to truly appreciate and understand both the darkness and light in your life and experience true freedom.

Dreaming of a blood moon (a phenomenon that occurs during a lunar eclipse) is often interpreted as a warning. The deep red of the blood moon may represent a dangerous situation in your life or it could indicate that you are scared of something.

This fear could be linked to the emotional suppression indicated by the motif of the lunar eclipse. Again, the fact that this fear or hardship has manifested in your dream in the form of a blood moon is a good indication that you should address this fear in your waking life.

Dreams about the moon can symbolize a great many things, from major life events to your own emotional state.

Most often, moon dreams will surround the themes of femininity, creativity, fertility, and the cycle of life.

Most lunar forms that appear in dreams, such as the crescent moon and full moon, are positive signs of present or future fulfillment and may symbolize success, growth, pregnancy, creativity, and change.

Less positive variations of the moon in dreams, such as the lunar eclipse of the blood moon, should not be taken as negative omens but rather as a helpful sign that something causing you pain or difficulty in your life needs to be addressed.